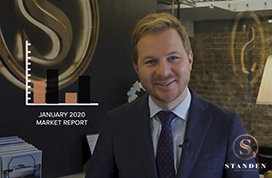 A quick recap on the last quarter of twenty-nineteen, which was certainly a more positive one in terms of the property market.

Following 18 months of instability prior to July last year, buyers were back and finally feeling confident again. The Federal Election was behind us, providing a little more certainty in terms of housing and lending policy; interest rates fell - and they’re currently on hold at an historic low of just 0.75 percent - and housing demand increased – all contributing to the recovery the Sydney property market has been waiting for.
By the end of the year, dwelling values experienced positive growth for the first time since the market peak in July of twenty-seventeen. It was only 0.1 percent, but enough to indicate things were starting to improve. Prices gently nudged upwards, while auction clearance rates surged – largely as a result of an increase in buyers competing for the reduced housing stock. Of course, with the New Year well and truly upon us, this renewed confidence is continuing to impact on the market.

It’s also traditionally the time many people are ready to make a change: buyers are wanting to move sooner rather than later, and sellers who were holding off because of Christmas are now looking at securing campaigns for the first and second quarters of twenty-twenty.

If you’re considering listing your property for sale, but remain unsure about what prices are going to do, the general consensus is that the market won’t fall below current values this year and we may actually see values continue to rise… slightly… over the next few months as more stock becomes available. Market analysts are predicting modest growth, with perhaps a 3 to 5 percent increase in value for houses and a 2 to 4 percent increase for apartments. This is compared to 2 percent growth for both houses and apartments in twenty-nineteen. These figures should be enough to further boost confidence in the market, however it’s twenty-twenty-one that analysts are already calling “the spring to the housing market winter”. In other words, it’s probably going to be another 10 to 12 months before the recovery really kicks in. While there are auctions underway each weekend, results are not collected until the first weekend of February. However, if the weekend of December 9 last year is any guide – which ended up being the second busiest auction weekend of the year – it’s likely clearance rates will continue to hover around the 70 or 80 percent mark over the coming weeks. Despite fewer new properties coming on to the market last year, the total number of listings was still higher than the previous year, which meant buyers had greater choice.

If you are thinking of buying or selling, as I mentioned earlier, now is the time. At Standen Estate Agents, we can prepare everything for your campaign and our Concierge Manager, Caroline, is also here to assist you with your initial enquiries. On behalf of the team here at Standen, I’d like to say how much we valued your support and business in 2019, and we look forward to working with you on your property journey this year.